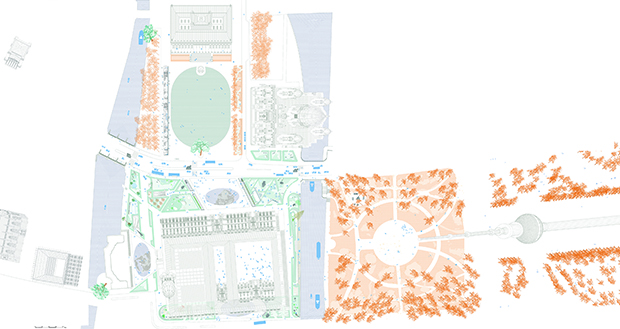 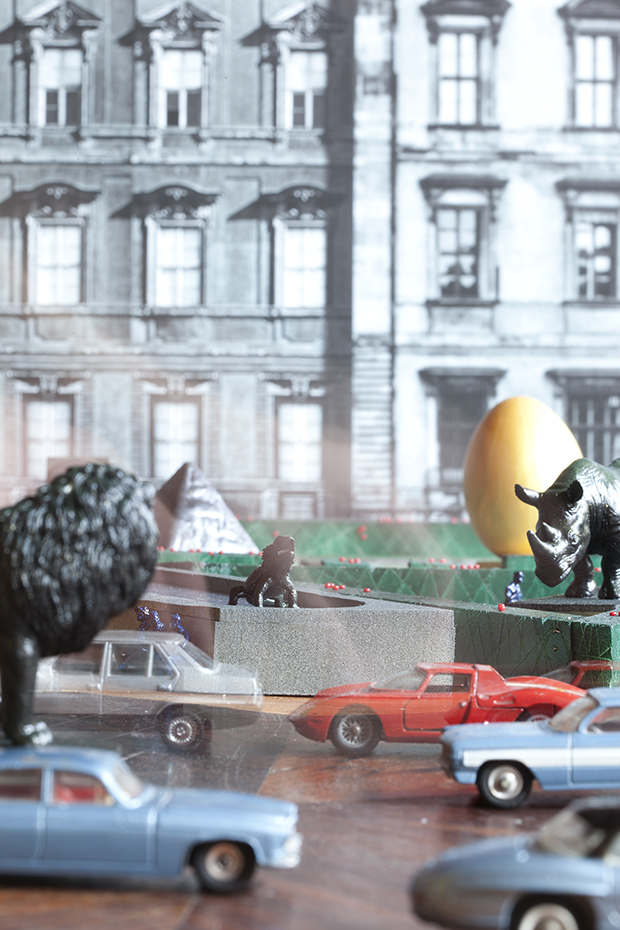 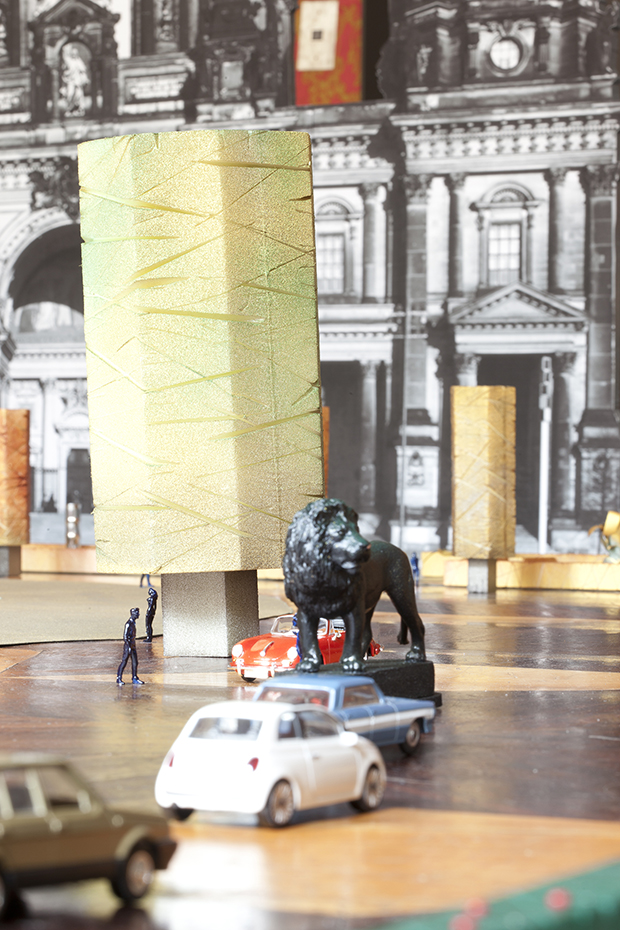 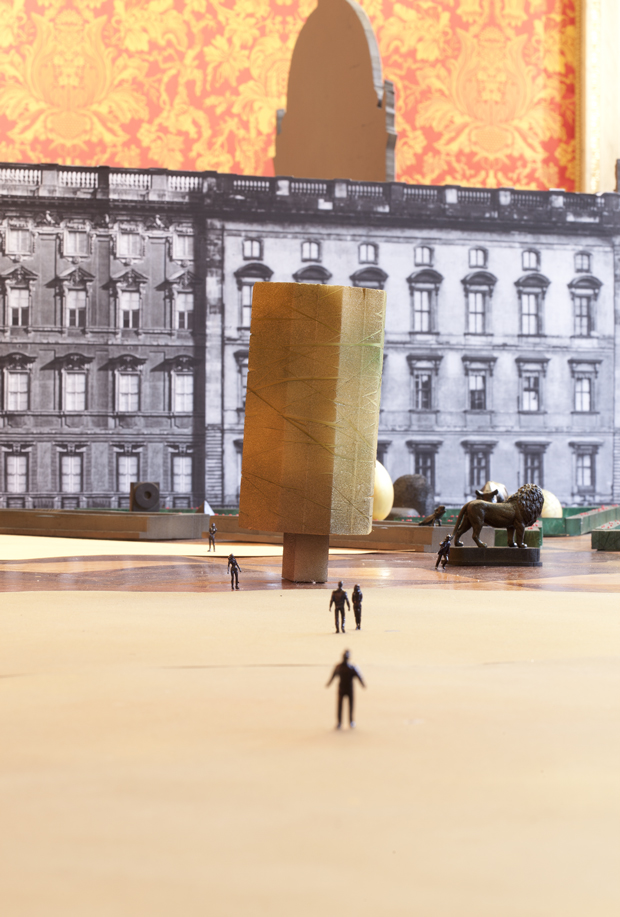 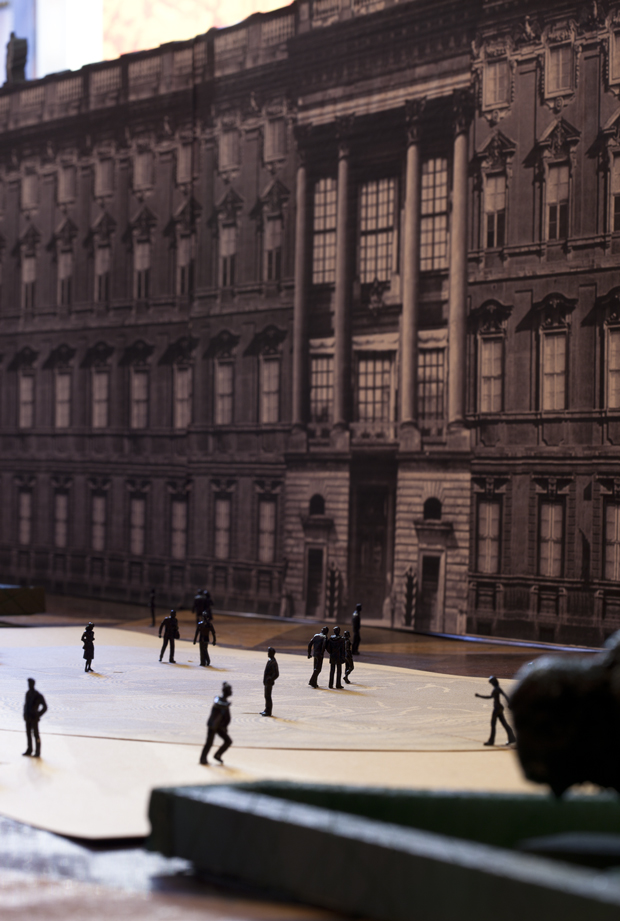 Having been built later, and on a flat, large landscape, Berlin is much more spacious than any other European capital. Berlin is made of this extreme abundance of space, and not just since the war and the Soviet era; Berlin has always been made of void, of distance, of nostalgia. The original landscape was flat and the city carefully respected and elaborated this flatness. The flatness, the largeness and the abundance of slowly moving water are clearly readable in Schinkel’s architecture. The loyalty to the geological/geographical condition of the city is the starting point of all of his buildings. The flatness is so important that, for all the talks about the importance of tectonics in his work, Schinkel’s buildings never have real bases. Schinkel’s buildings are always boxes just leaned on the ground next to each other in slightly different angles. As such, the volumes do not have a fixed relation with the soil neither with each other; they seem to slide like geometric icebergs on an unbelievably quiet see.

Berlin is now building a new Forum of non-European cultures. The Forum will be hosted inside of a full-scale reproduction of the old Berliner Stadtschloss. As a result, the Forum will be a singular hybrid of progressivism (the content) and conservatism (the envelope). We choose to take this policy as a given and not to question previous decisions. Yet, the paradoxical nature of the process should not be hidden. The multitude of contradictory desires incorporated into the Forum needs to appear in the landscape around it. The refined urban equilibrium that was broken with the demolition of the castle needs to be re-activated, yet this re-construction should not happen as an exorcism erasing the recent history of the place. We propose to surround the Forum with Italian gardens extending all over the competition site. The Italian gardens produce a multiple open space, composed of five groups of open-air green rooms defined by hedges of different species (both deciduous and evergreen) from all over the world. By filling the majority of the surface with more intimate, low-intensity or specialized functions such as restaurants, sport fields or archaeological areas, the – potentially excessive – amount of “public” open space is reduced to a reasonable figure, producing three “squares” in front of the northern, western and southern gates of the Forum.

The subdivision of the Italian gardens into smaller areas allows satisfying all requirements presented in the competition brief in the most direct and pragmatic way, accepting all restrictions and turning them into opportunities and generators of form. The geometries of the Italian gardens turn all these accidents into form: paths leading to metro entrances and fire escape tracks contribute to the hybrid geometry of the gardens, half baroque, half futuristic, half Barry Lindon, half Space Odissey.

The Italian gardens re-establish the link among the castle, the Dom and the Altes Museum. The geometric landscape of hedges indeed is never higher than 130 cm, so there will be no visual obstacle separating the buildings that gravitate around the Lustgarten. The proper distance among things is re-defined; the intervals are not filled; the ancient gravitational system is re-enacted; elements once again compose a single, slowly moving, universe. Yet, while providing a subtle and efficient solution for the area, the Italian gardens produce a suspended, surreal tone. They deliberately expose their own unreal character. In an act of extreme realism (somehow, a form of loyalty to the realism of Schinkel), the gardens raise the question of their own legitimacy. Can this place in the middle of Berlin really be an Arcadia?