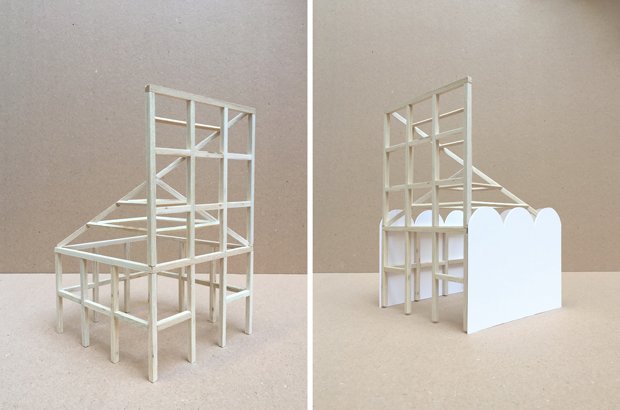 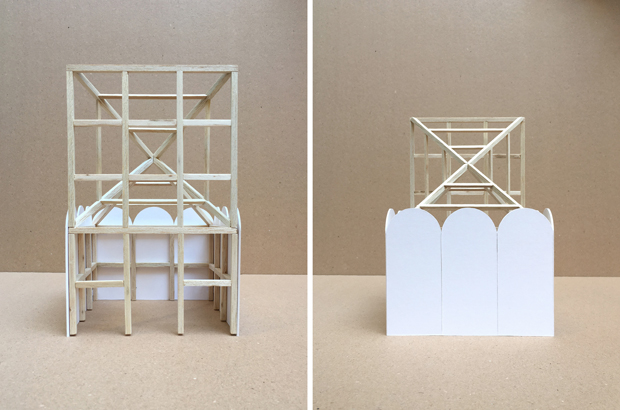 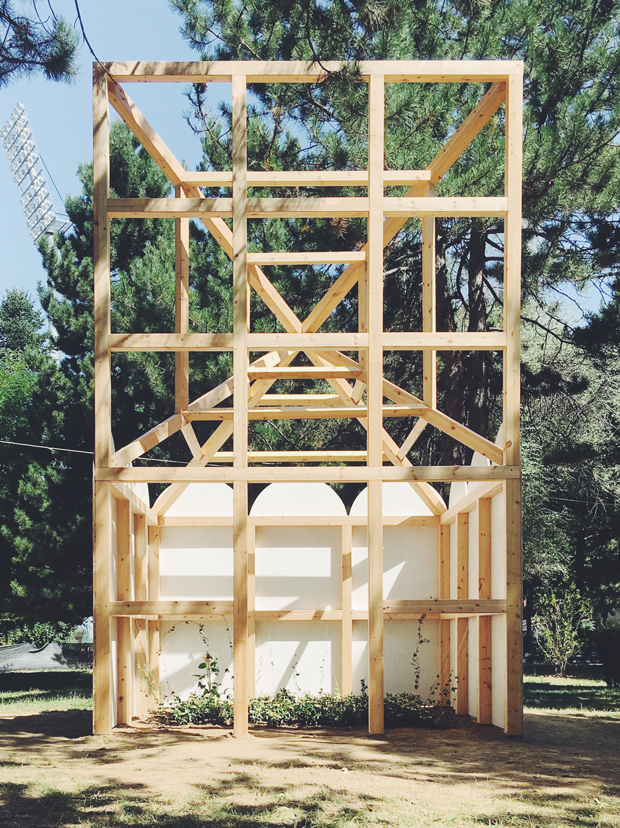 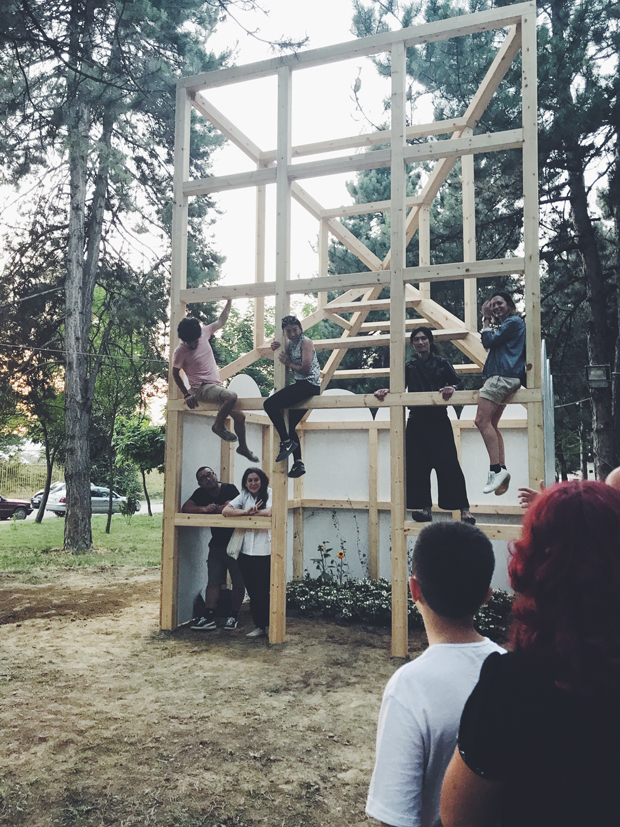 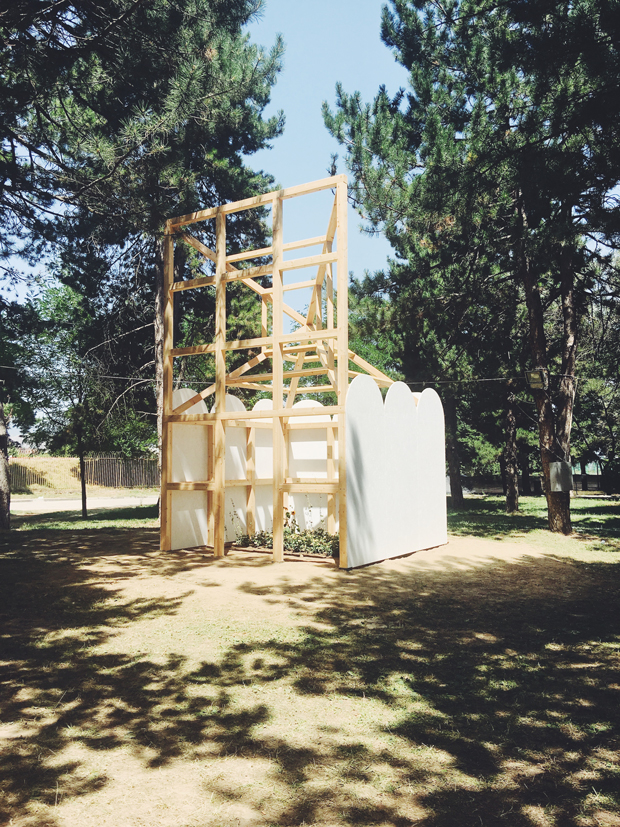 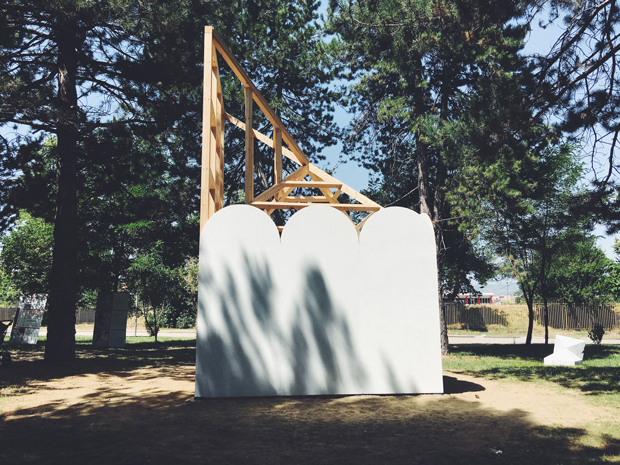 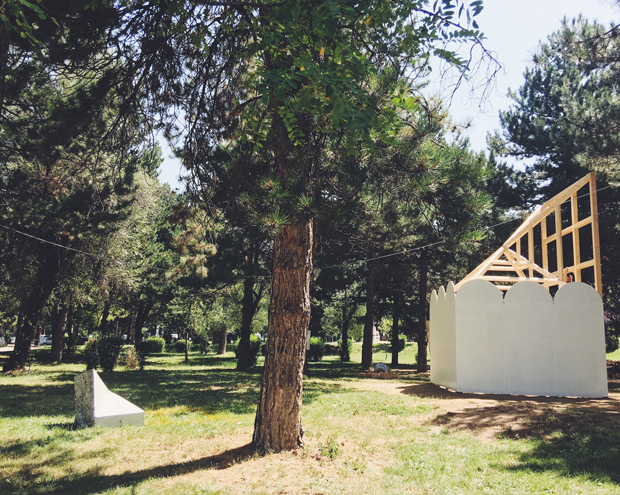 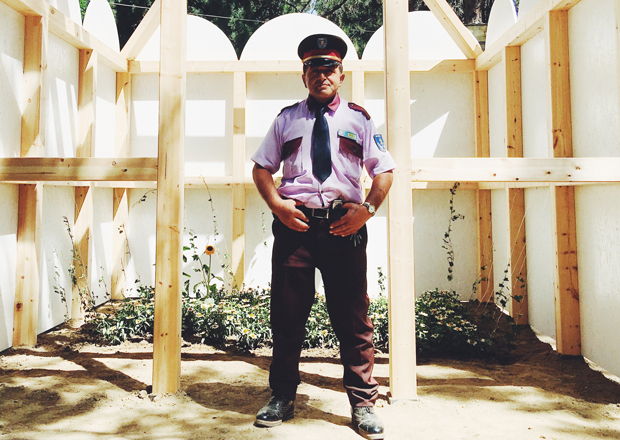 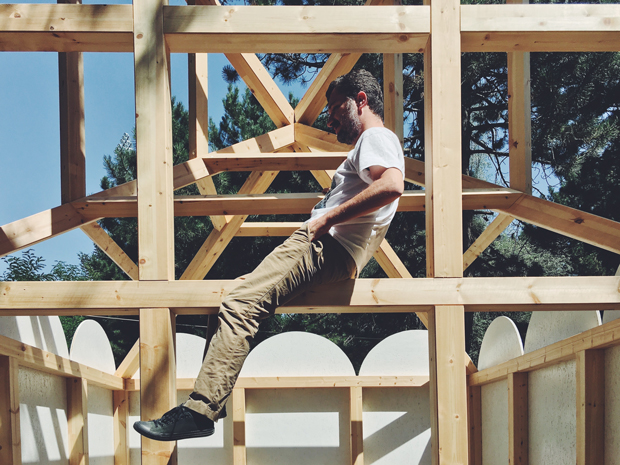 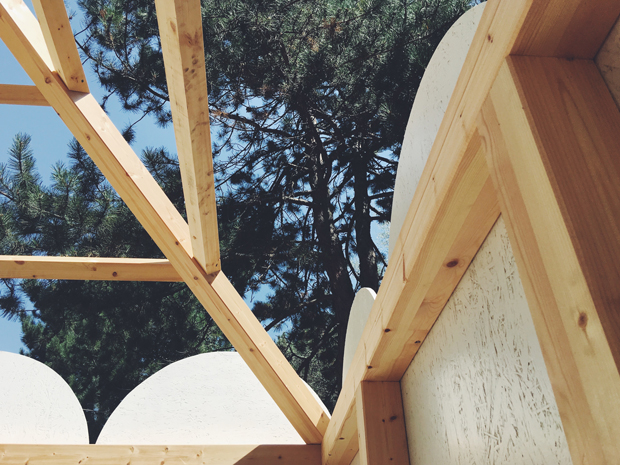 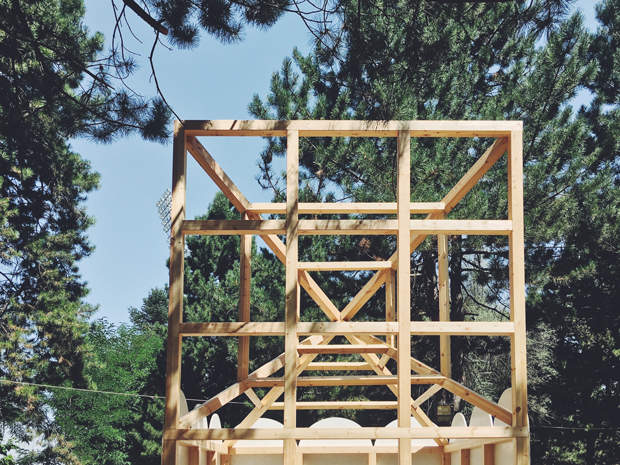 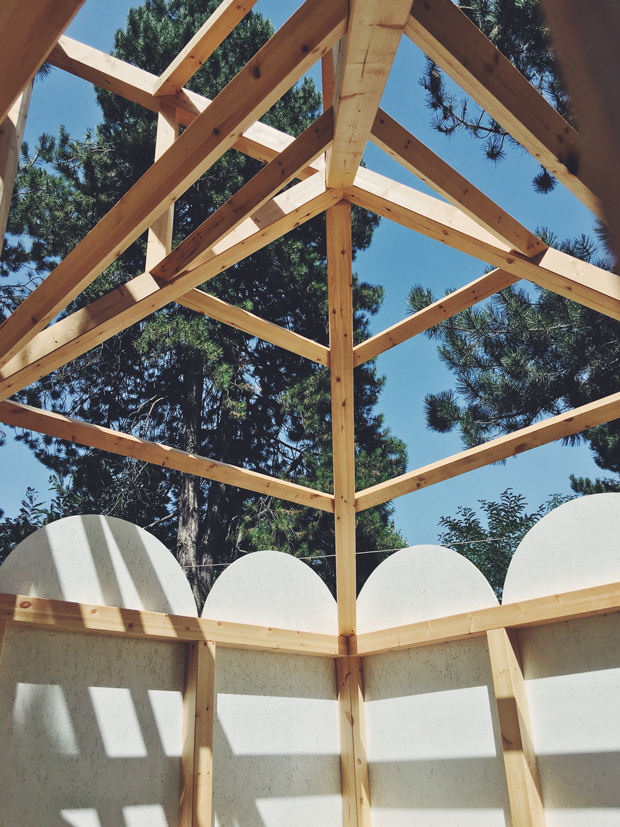 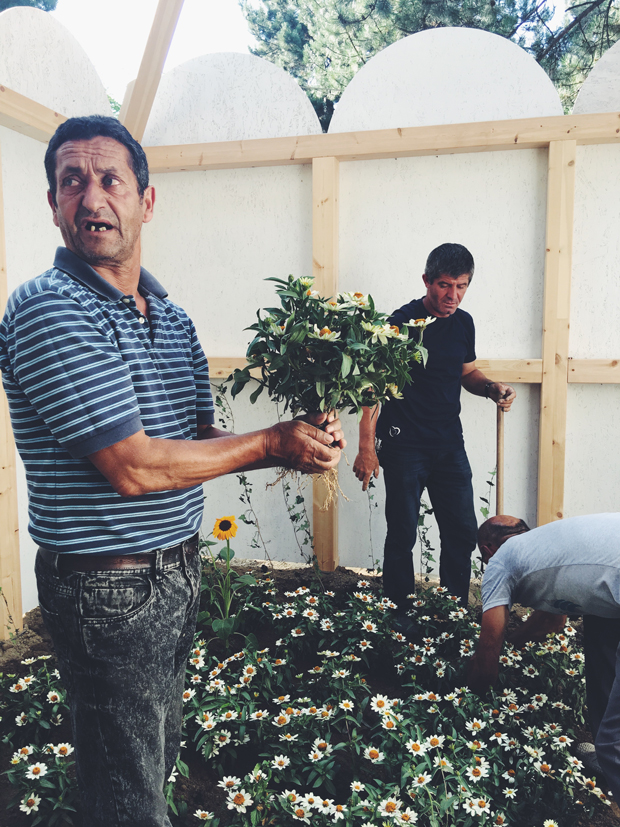 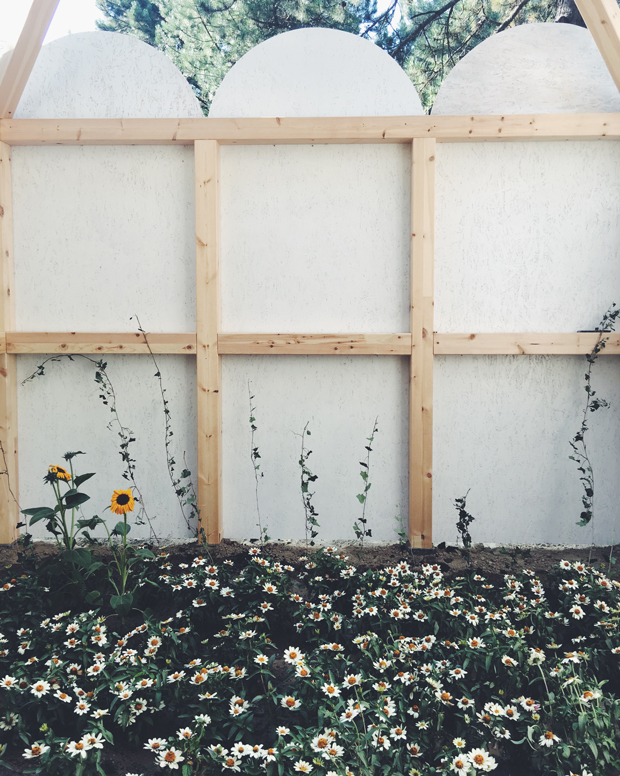 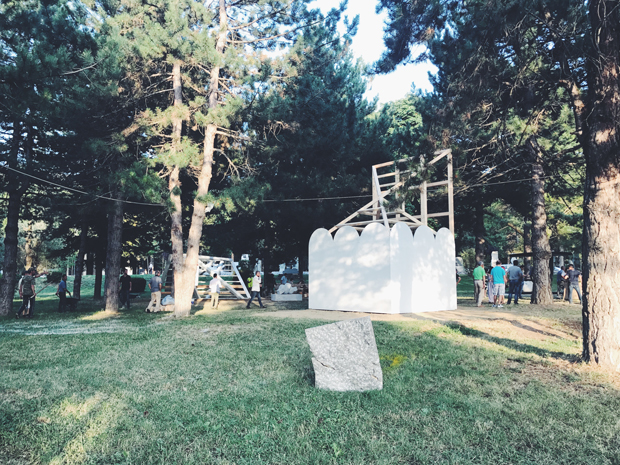 International Symposium of Architecture and Sculpture.

supported by:
Municipality of Korça, Ministry of Culture and Embassy of the Netherlands in Albania

description:
Our work started form the exploration of a series of sculptures entitled Concert of Shadow and Shape by the japanese artist Takeshi Kubo. In his work emerges the interaction between simple and primordial shapes that grow in height trying somehow to reach the sun and to be influenced by it.

From the study of these sculptures we propose a small architecture for the city of Korça, a city well known around the Mediterranean countries for its history and landscape. Our aim is to create a pavilion that represents a new occasion for the city to display the identity and the memory of Korça in its territory.
This small architecture is meant as an educational device that hosts different arts and knowledge, bringing back the idea of the Bangas Gymnasium in a more public and open context. We want to create a living diorama able to contain a living landscape framed by a timber structure.
The pavilion exposes itself in its archetypical forms, influenced also by the ottoman architectural tradition, contains a garden and displays different activities. Architecture, Nature and the Life of the City will coexist and interact.
The pavilion allows the visitors to experience minimal adventures able to improve the public activities of the city. The pavilion is a squared room 3.5 by 3.5 meters that reaches around 5.5 meters in height. It is characterized by different elements.
The Squared Grid is the timber structure that sustains the Two Pyramids Open – Air Roof. The access to the pavilion is on the main and interactive façade called The Big Wall.
Over the entrance there is The Great Square, a squared timber grid that frame the landscape and the activities hosted on The Great Wall. The Great Square can be use for gymnastic (swedish ladder, rings, etc.) and as a wall to have an open-air movie theatre. The other three façades, The Three White Triptychs, are defined each by three arched planks. Through these arches linked to the ottoman period, we suggest the idea of the Morava Mountains Skyline. Inside the pavilion we’ll finally find The Garden of Delights in which the visitor could have an immersive experience in which explore and find a possible coexistence between Architecture and Nature and could be active part of the Living Diorama Pavilion.